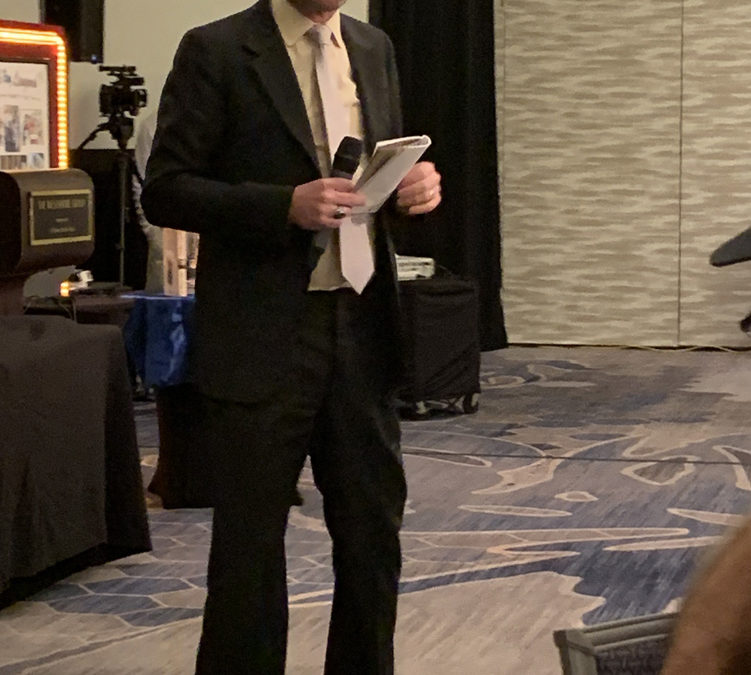 The 33rd National Convention of the American Merchant Marine Veterans (AMMV) organization opened with early Registration on Wednesday, March 20th. The Registration team was led by Kimberly King with Lynn Kelly and Sindy Raymond assisting. The Hospitality Room was once again generously stocked with drinks and snacks. In addition, Shirley Knight provided a variety of Easter candies. 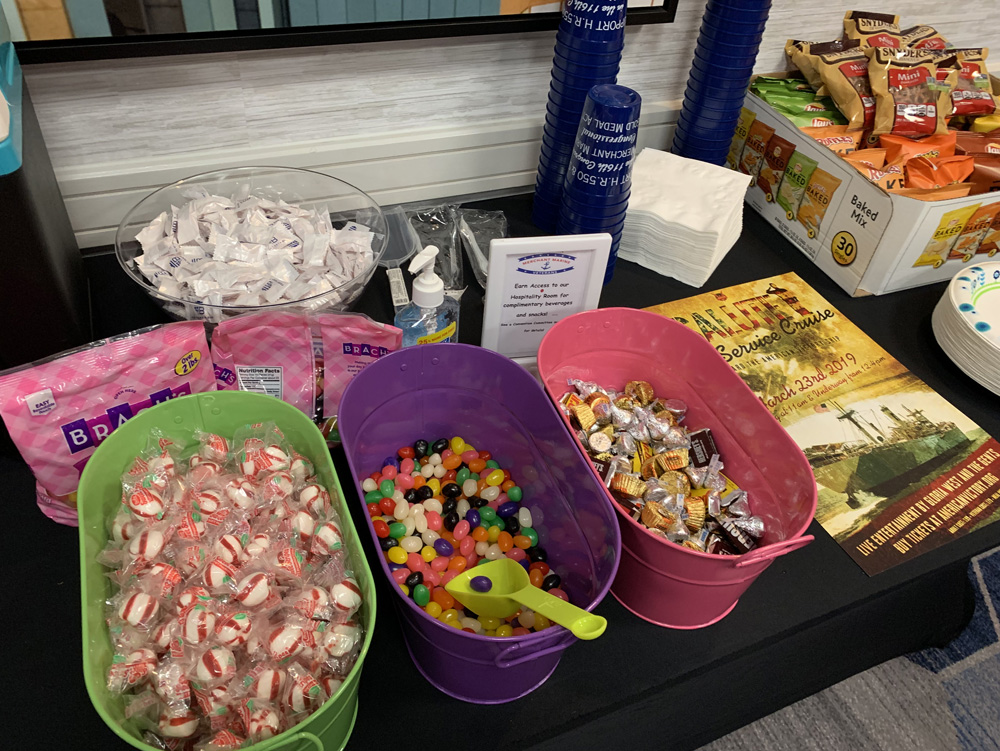 Many other items and treats were featured. Special challenge coins to commemorate the 33rd Convention, in conjunction with the SS American Victory Salute to Service cruise, were provided to all WWII Vets and VIP’s. AMMV calendars were given to all paid registrants, and promotional drink cups to support the WWII Merchant Mariner Congressional Gold Medal Act (H.R. 550 & S. 133) were available for all. Form letters in support of H.R. 550, addressed to the committee holding the bill, were signed by all hands. All attendees received a “goodie bag”. Through no fault of our own, the shipment of the Commemorative Magazines was not received in time. Copies were later mailed to all attendees and paid advertisers.One notable surprise was courtesy of AMMV member Thomas Glenn Hill, who provided color posters of vessels for each of our WWII Merchant Mariner attendees. These were individually presented by Sheila Sova, who had done the research to pair mariners with their respective vessels. Hill’s late father served in the WWII Merchant Marine. 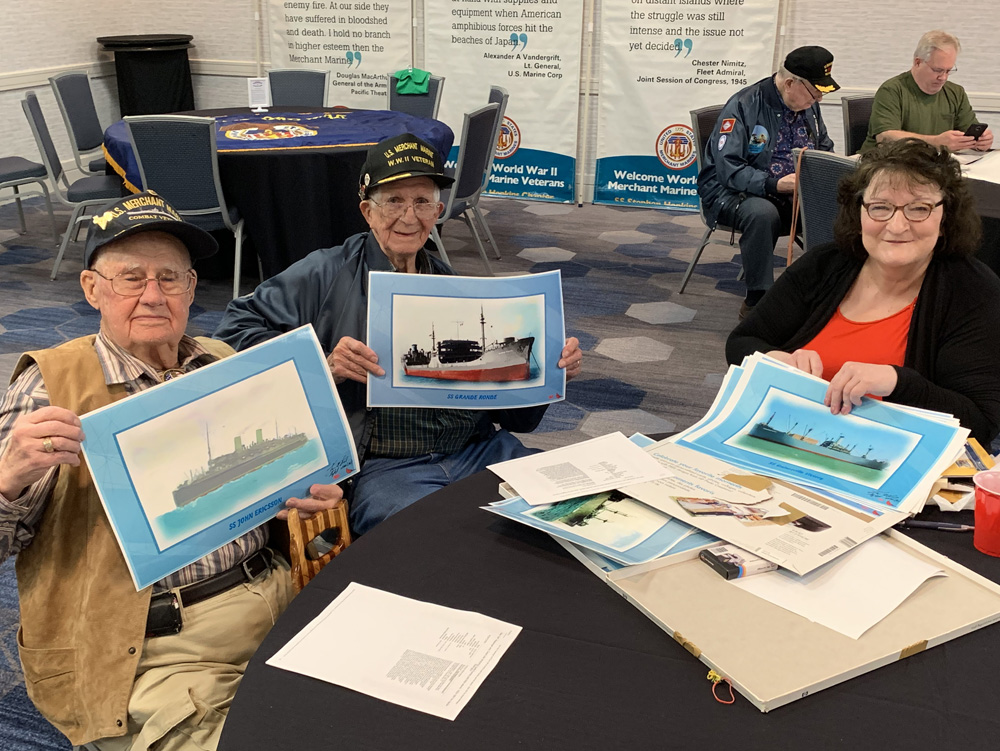 The annual Board of Directors meeting was held on Thursday morning. Topics discussed included our 501 (c) nonprofit status; membership concerns; timeline and importance our C/MSRB Veteran status application for Korean Conflict U.S. Merchant Mariners; location of the 2020 AMMV convention; and financials. The proposed budget was approved after being amended to include $4,000 for advertising in the quarterly Kings Point (USMMA) alumni magazine.Opening Ceremonies commenced after lunch, which included a prayer by AMMV Chaplain & Regional VP Bob Ross, and the performance of Star-Spangled Banner and Heave Ho by Sally Langwah. Capt. Christopher Edyvean followed with a President’s Report. Key topics included membership concerns; social media & website report; the need for more key volunteers; and WWII Merchant Mariner legislation.Father Sinclair Oubre from the Apostleship of the Sea – USA provided a progress update on efforts to see Brother Marinus (Capt. LaRue of SS Meredith Victory) elevated to the level of Sainthood.Later that evening, approximately 70 convention guests enjoyed a dinner cruise on the yacht Starship II in Tampa harbor. Convention Chairman Capt. Dru DiMattia arranged for big band era music to be played in the background. After dinner, Sally Langwah sang Happy Birthday to AMMV Executive Vice President Christian Yuhas.Friday morning opened with WWII Merchant Marine Veteran and world-class speaker Dave Yoho appearing for his fourth straight convention. Mr. Yoho dazzled the crowd with another inspiring speech, the theme of which was “Why can’t they hear what we are saying?”Following a coffee break, Past-National President Morris Harvey was surprised with a Board of Directors proclamation bestowing upon him the title of President Emeritus. A framed certificate and a special ballcap (provided by Bob Ross) were presented to Morris.AMMV President-Elect John Pitts paid tribute to WWII U.S. Merchant Marine Veteran & AMMV member Capt. Arthur Moore, sole researcher and author of “A Careless Word, A Needless Sinking”, the detailed chronology of U.S. maritime ships and lives lost during involvement in WWII. Capt. Moore crossed the bar in late 2018. (Pitts also served as Master of Ceremonies throughout the convention.)Toni Horodysky, creator of the usmm.org website, took the podium next and talked about her website. She highlighted some interesting historical finds while performing research. 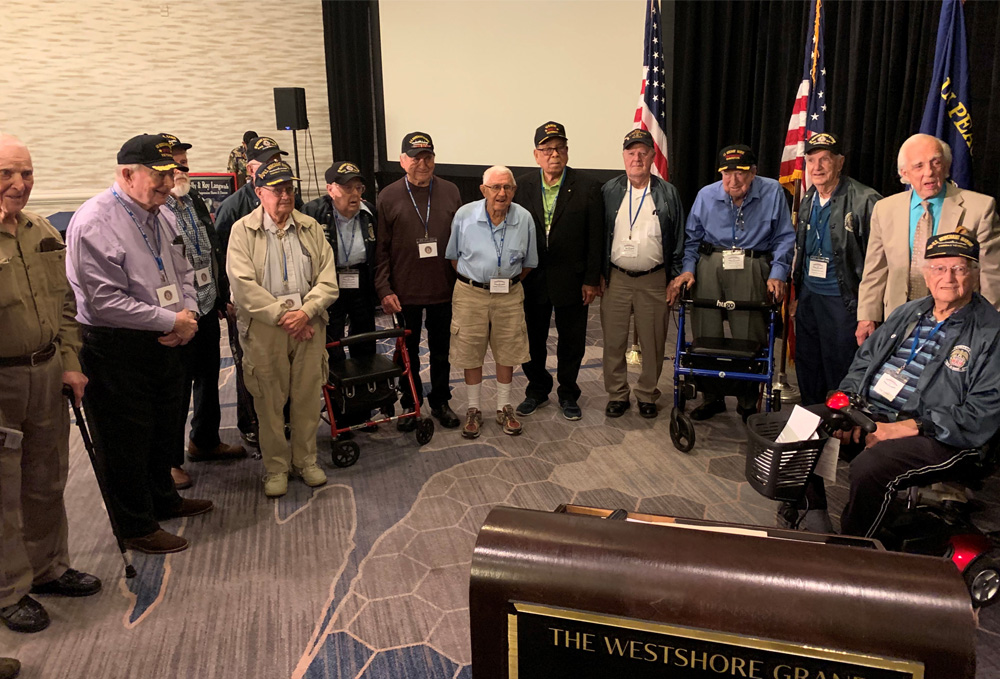 After lunch break, AMMV Webmaster Bonnie Dye joined the group to discuss ammv.us. She answered various questions related to the website.Christian Yuhas introduced three Resolutions which originated from the Golden Gate Chapter. After some minor tweaks, each of these Resolutions was approved by the membership.NOAA representatives David Alberg and Tane Casserley played a short DVD of which included footage from interviews conducted with our WWII Merchant Mariners at the 2018 National Convention. This film is part of ongoing efforts toward east coast sanctuary expansion. 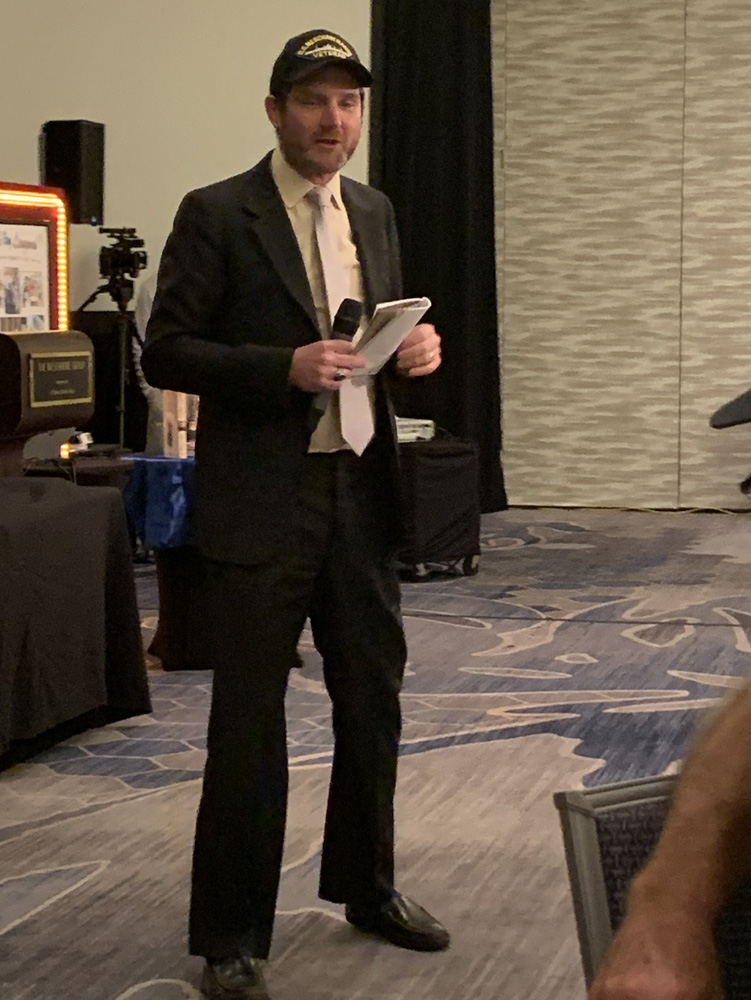 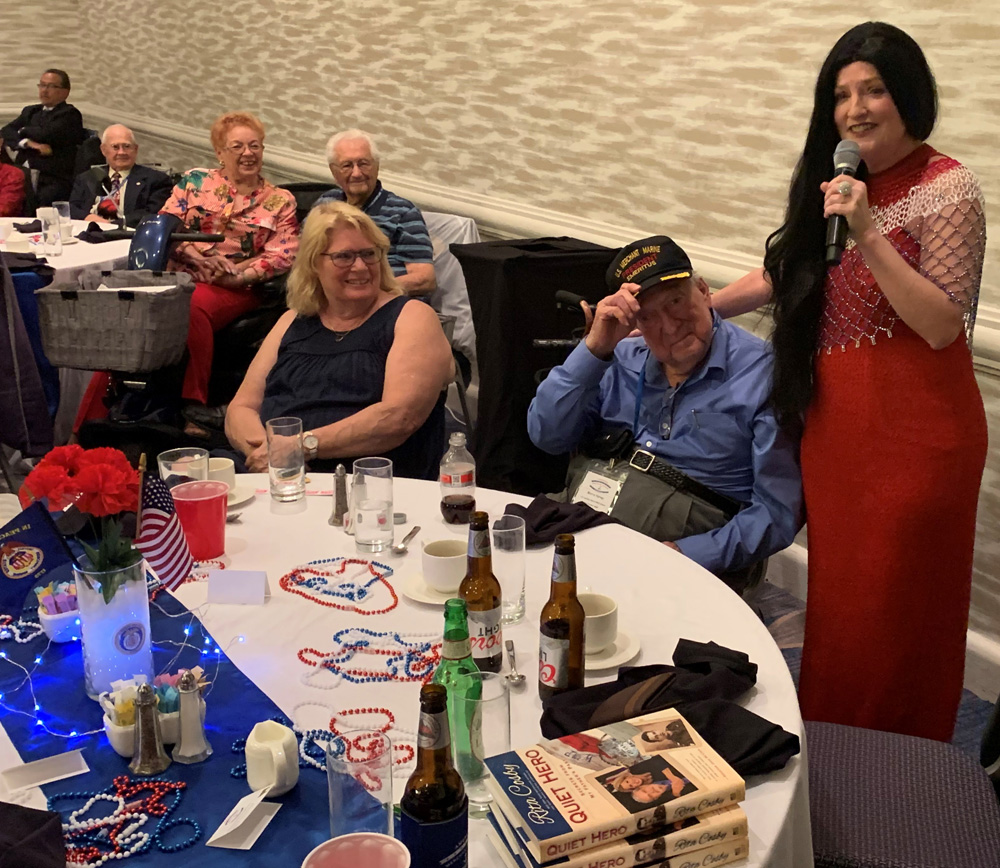 On Saturday morning, our group was bussed to the Florida Aquarium for a breakfast with guest speaker 3-time Emmy Award winner, famed TV news reporter, and Veterans advocate Rita Cosby. This event was held in the Mosaic Room, which overlooks the bow of the SS American Victory, creating a beautiful setting for the morning. U.S. Maritime Administrator Admiral Mark H. Buzby joined us and provided opening remarks. Rita told the story of her father’s experience as a Polish resistance fighter, who was taken as a POW and later rescued by U.S. troops. After her presentation, Rita declared to support legislative efforts for our WWII Merchant Mariners. She kindly allowed time for photo ops with our Veterans. 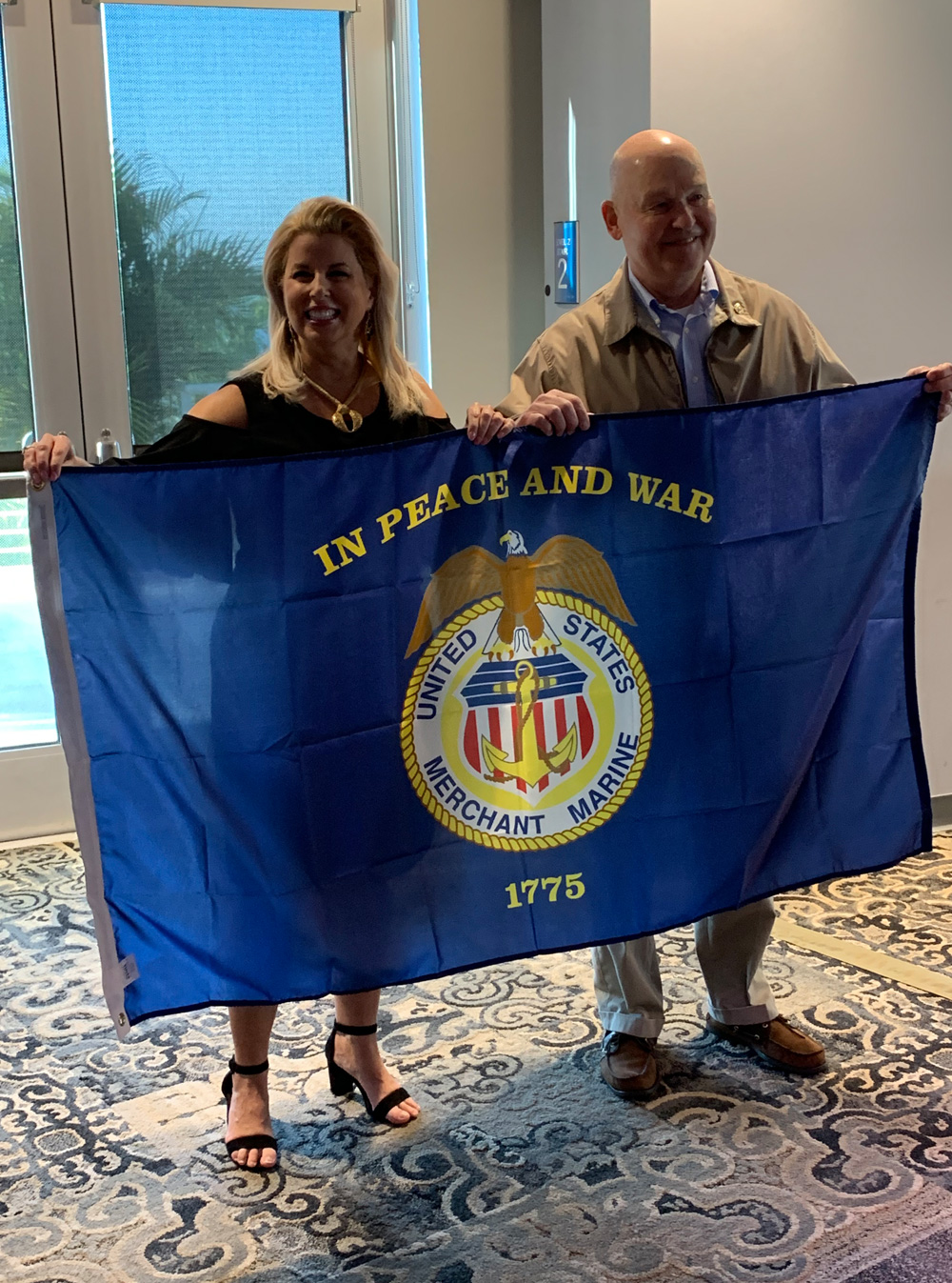 Our 33rd convention concluded with our gang being part of the SS American Victory Salute to Service cruise, which was attended by approximately 650 persons. The cruise included lunch by Mission BBQ and live entertainment. The weather was absolutely perfect for the day’s activities. During the cruise, Rita Cosby interviewed a couple of our Veterans, and later announced and identified each of our Vets by name over the PA system. This was a wonderful way to let the cruise participants be aware of our WWII MM Veterans. Footage of the cruise later appeared on local TV stations. 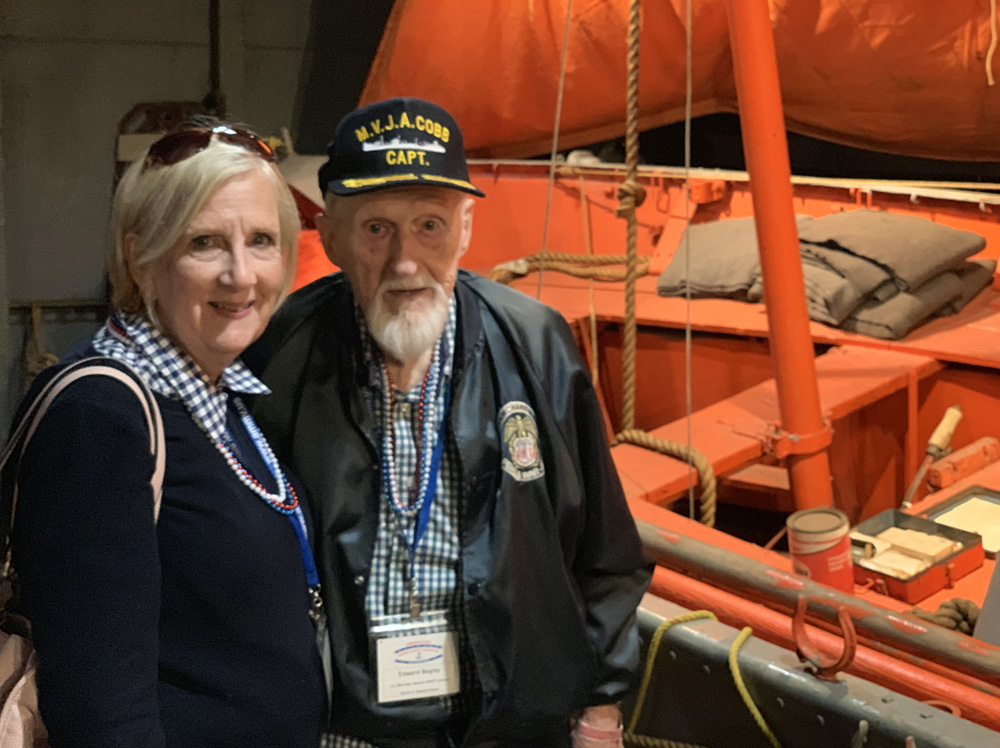 Early discussions indicate a return to MITAGS (Baltimore) for a 2020 convention. See you there!