AMMV supports efforts of the Battle of Atlantic Memorial

In addition to commemorating the Battle and all of its participants and contributors, the Memorial will have an educational role, informing the public – particularly young people – about the Battle of the Atlantic and its vital significance.Representing the BOAM at the AMMV 32nd National Convention in St. Louis was Commodore Martin Connell, an attaché from the British Royal Navy. Commodore Connell discussed the organization’s goals and timeline in regards to constructing the monument in Liverpool that will honor, along with other groups, the Merchant Navies and Merchant Marine of all Allied nations of WWII. 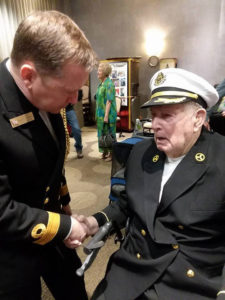