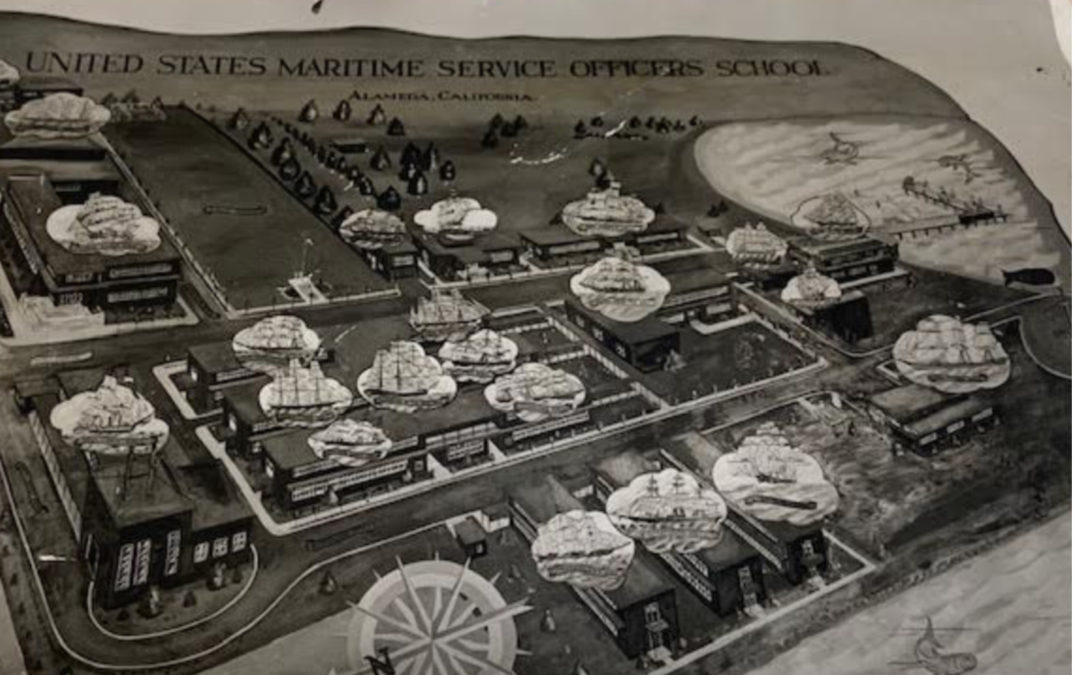 The debate over the demolishment of several buildings comprising of several barracks. mess hall, and ships engineering lab of the old USMSTS Alameda was put before public comment last night (7/6/21).  The opening was less than promising.  The motion before Alameda City Council was to uphold the decision of the city’s Historical Advisory Board that the buildings were not historic in the least and the developer could demolish them.

Many public comments from residents came in that they voted for the reuse and not the demolition of buildings.  The city’s attorney contested that the language of the bill was not so much about reuse, but to defeat the second proposal on the ballot.  This set the stage for what was to come.

The meeting dragged on for a couple of hours with eighteen speakers and closing comments from the city council members.  About two thirds of the public who spoke, acknowledged the importance of the buildings for the history of Alameda and many appreciated the role the United States Merchant Marine played during the war.  Not a single supporter of keeping the buildings stated they should be empty or should not be used for anything other than their legislated purpose – a Wellness Center.

On the other side of the aisle, the Merchant Marine community was painted as gullible and being used as a tool to prevent the creation of an important civic resource; moreover, all those who supported demolition stated all those who did not support demolition were against the Wellness Center.  It was a very unsettling affair, to say the least.  We had veterans speak, we had many lovers of history and the community speak.  Those who spoke on keeping the building’s behalf, did so with tact and decorum and pointed out inadequacies in the initial reports on the importance of the site and the glaring absence of the prominent architect who designed the place.

Unfortunately, for those of us from the AMMV and the community who wrote in and spoke to impress upon the City of Alameda that the buildings they planned on demolishing were part of the greater story of this nation’s maritime history, our efforts met mostly deaf ears.

The City Council voted 3 for and 1 against, with 1 abstention to uphold the Housing Advisory Board’s decision, to not wait to see if the buildings meet the criteria for protection under the National Historic Register, and to proceed with granting the developer a permit to demolish.

There is a silver lining. At the beginning of the hearing, the developer produced a presentation that attempted to assuage those concerned with the preservation of the site that the buildings they propose to demolish were alright to erase since they did not contribute to the overall feel of a training station campus, and that they lacked the integrity that would warrant saving them. As almost an afterthought, he pointed out that there are three buildings outside of the parcel that was part of the old training station and that they will not be touched. On one hand, is of little solace, since a hand is no replacement for the heart.  Yet, on another, it does enable us to concentrate our efforts to at least save those buildings and guarantee some amount of stewardship the others never had. All is not lost.

We weren’t fighting for mere buildings, we were fighting for the story of our Merchant Marine to not be erased.

I strongly object to the proposed demolition of the property at 620 Central Ave/ 1245 McKay Ave. historically known as the U.S. Maritime Officers Training School.

The Historical Advisory Board did not follow the proper protocol under the Alameda Municipal Code Section 13-21-5, and they did not discuss whether or not the buildings are a “detriment to the community”.

Furthermore, the City Staff report mischaracterized the property and stated that the property is not a historic resource, when in fact the Historical Advisory Board approved to keep the property on the Historical Advisory Board Study List, and stated in its meeting that the buildings have historic value and merit. The site unequivocally has historical importance for Alameda’s military history, as well as State, National and International WWII and Korean War history.

There is a pending application to the National Register of Historic Places and new information was submitted that was not discovered by the Page and Turnbull 1996 report and subsequent 2021 memorandum that only looked back at the same report. These buildings have been here for over 70 years–waiting a few more months for the national and state historical experts to fully evaluate the property is a reasonable request.

A petition that is currently being circulated by the American Merchant Marine Veterans group has gathered over 250 signatures from Alameda residents and over 1000+ total. This cumulative public sentiment should be noted and taken into consideration.

The ballot measure language of the 2019 special election, Measure A, clearly stated, “reuse” of existing buildings, and the voters expected the buildings to be repurposed.

Measure A: “Shall an ordinance confirming the City Council’s actions to permit reuse of vacant federal buildings on a 3.65-acre parcel on McKay Avenue and allow for the development of a wellness center for senior assisted living and supportive services for homeless individuals by changing the General Plan designation from “Federal Facilities” to “Office,” removing the Government Combining District classification and maintaining the existing zoning district designation, be adopted?” (emphasis added)

Reuse of buildings could also include a commemorative interpretive center that could potentially also bring tourism to the City. Other Bay Area WWII era sites include:

The Applicant for demolition never submitted any financial documentation regarding seismic upgrading. Their statements were not backed by any data. This sets a precedent that anyone can argue that upgrading is “too costly” and petition for demolition under these grounds.

For these valid reasons, I respectfully ask that you deny the Certificate of Approval for demolition. Alameda is a city that cherishes its history and historical properties, values the efforts set forth by the Merchant Marines during WWII, and we should strive to preserve remnants of our past to educate our future generations.

We have seen developers in the past tear down historic buildings because of supposed “financial reasons”. This is not a good reason to demolish the last remaining WWII era Merchant Marine training center in the United States, that now we also know was also thoughtfully designed by a Master Bay Area architect. I urge you to take efforts to preserve it so the  buildings may be repurposed and serve as a visual reminder of this important legacy.

Photos from Carmen Reid collection of Kodachrome slides and current pictures taken recently of the remaining buildings at the Alameda USMSTS. To contact Carmen with questions or feedback: carmereid@gmail.com

The Neptune magazine from the Alameda USMSTS as well as photos are from the collection of Ian Watts. Contact: ianewatts@gmail.com